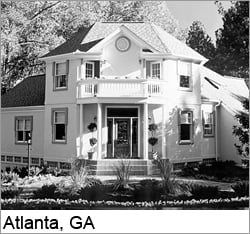 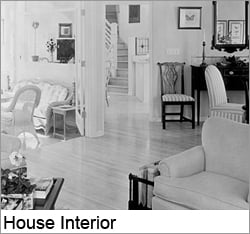 Though not quite as dramatic as its immediate predecessor, the 1990 New American Home ushered in a new decade with a variety of design and product innovations. To date, it was the only house with a full basement; though not new in itself, the below-grade space featured an exposed and unfinished (albeit colored) split-faced concrete masonry wall system tipped by a row of glass blocks, giving the house a rim of light among the first floor plate. The walk-out basement also housed myriad modern family functions, including a generous home gym, a game/play room, a space from crafts and hobbies, a den/office, and a family television/media area—all of which preserved the above-grade levels for more traditional public and private spaces. The non-traditional floor plan indicated other trends: the lessening need for formal living and dining areas; the intelligence of locating the main stair in the kitchen instead of the foyer; a bonus room over the garage with private access from the street; direct access to an expansive deck from every room on the main level (including the master suite); and a large loft on the second floor that is the precursor to the “flex” spaces now common in modern homes. Finally, the house broke form by transitioning from a synthetic stucco system on the front façade to an engineered clapboard siding on the back.

The house also pushed the envelope with its performance features. Encompassing a total of 2,491 square feet, the three levels were each on a separate HVAC zone to better control energy use and costs, while the equipment itself did double duty for space and water heating; an air cleaner component and a radiant-heated floor supplemented the effort. An insulated foundation waterproofing system protects the finished basement, while a continuous vent along the top of the roof ridge helped keep attic temperature and moisture in check. In the kitchen, the cooktop sported a motorized downdraft vent that would pop-up only when needed, while the mud room offered a built-in ironing center.