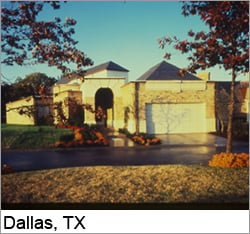 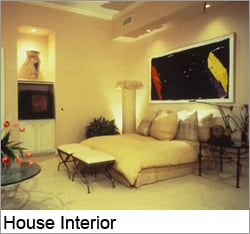 Long before anyone was considering the impact of active adults on the housing market, the New American Home jumped on it. The 1987 house made a dedicated effort to attract empty nesters with a well-appointed, contemporary approach. Angled to the street and revealing little behind its façade except a long peaked roof to the back, the 3,600-square foot, single-level plan features only two bedrooms … the latter of which further refined the concept of a master suite retreat with a full yet separate his and her bathrooms and closets and a sitting area staged in a circular window bump-out. To fully reveal its dogleg footprint, architect Barry Berkus kept the interior wide open; only columns lining the center hallway indicate rooms along its path, including a circular-shaped den and dining room set across from each other, while high windows being daylight through the plan. A thin-mullioned corner window was another anomaly.

The 1987 house was ahead of its time technologically, as well. A whole-house audio system, remote security monitors, and a two-line phone scheme that enabled multiple communications functions were precursors to today’s structured wiring schemes. In the kitchen, the plan called for two of everything, as well as a multi-functional island, wine storage in the refrigerator, and a new solid surface material called Corian. The asking price? A cool $845,000, the most expensive in the young history of the program.

The columns along the home central hallway begin with a Corinthian design at the foyer while the rest are smooth.