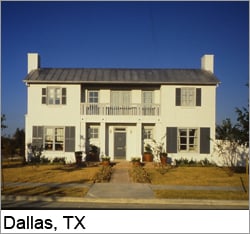 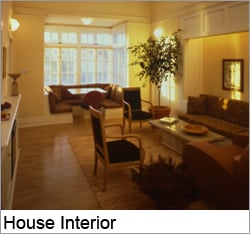 In a return to moderation and traditional design, the 1986 New American Home targeted a more mainstream move-up buyer with 2,200 square feet, a $269,000 price tag, and a symmetrical, farmhouse-like front façade. As if added to over time, the house extended back with variations to its rooflines and room shapes, held together with white brick on all sides and a lead-coated copper roof. It also took advantage of its corner lot to place the garage on a side street and set back rather than front-forward—a placement that lessened its impact but also incorporated it nicely into a four-sided architectural effort. The footprint also created a pair of covered patio spaces flanking a screened porch accessible from several rooms in the house through hinged patio doors; aligned to the front door, the arrangement created a long sightline from the entry to the back of the property. The porch and pergolas opened to an enclosed patio, extending the living space even further. In keeping with its traditional front, the entry eschewed volume; rather, architect Robert A.M. Stern limited that modern feature to the family room at the back of the plan, where he also incorporated a built-in eating nook into a window bump out. In a forward-thinking nod to contemporary lifestyle needs, Stern also dedicated a den, using the main staircase to shield it for privacy and placing it adjacent to the first floor powder room (and just beyond that, the kitchen) for at telecommuter’s convenience.

Architect Robert A.M. Stern called his creation “The old American Dream House with better plumbing” and the garage “one of the worst architectural elements in history.”