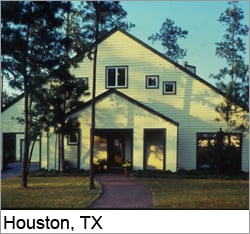 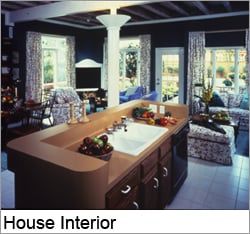 Though it remains the smallest and least expensive home in the 25-year history of the program, the inaugural New American Home was hardly timid or conventional in its approach reinventing the master-planned suburban house. Providing just 1,500 square feet on two levels, its footprint looks bigger thanks to a front façade that extends 12 feet to either side, one of which serving as the gateway to a detached, two-car garage positioned along the back of the property to lessen its impact on the street, the other leading to a shielded side yard. The modest, symmetrical front porch is slightly curved to soften the mass of the front elevation, while odd-shaped and -placed windows add dimension and distinction, further breaking down the mass; clapboard on all sides provides a unifying finish to the home’s four-sided architecture. Inside, the square footprint is left open on the main level, with a 10-foot plate and living areas discerned by furniture, flooring, and a few columns. Upstairs, the master suite is coined as a “retreat,” with a step-down tub and shower and high windows between the bedroom and bathroom to share light and deliver impact; a pair of small secondary rooms and another full bath occupy the remaining footage.

Among its innovations, including the “master retreat” concept, the 1984 New American Home employed 24-inch on-center framing and other advanced structural techniques; an adjustable-stem faucet and instant hot water dispenser in the kitchen; a delay-start dishwasher that purported to save water and energy by enabling off-peak use; and a heat pump system with integral water heating to also reduce its energy consumption.

The 1984 house was the only one in the program’s history to sell for less than $100,000, the last year that the average price for a new house was under that mark.