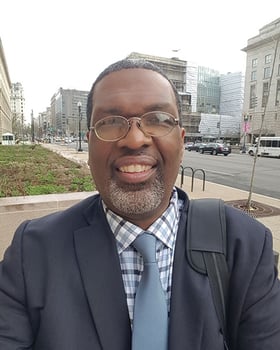 Terrence Mosley is originally from Jackson, Mississippi and received his B.S. in Mechanical Engineering from Southern University at Baton Rouge, LA, and his M.S. in Mechanical Engineering from the Georgia Institute of Technology. He served as a Regional Engineering Manager for General Motors and Delphi Automotive Systems for almost 20 years, and also has served as a small construction and real estate development business owner and entrepreneur. He is now serving as a AAAS Science and Technology Policy Fellow for the Department of Energy where he works in the Building Technologies Office in the Zero Energy Ready Home program. Being passionate about helping others, he has worked on many STEM pipeline development programs for women and minorities, including starting and sponsoring an inner city FIRST Robotics teams in his hometown of Jackson, Mississippi that won multiple regional and national awards. He has also sponsored and mentored many minority undergraduate and graduate students through scholarship programs such as the GEM Fellowship and through giving many internship and co-op opportunities. He was honored with a Black Engineer of the Year Special Recognition Award for his efforts in increasing the diversity of the future STEM Pipeline. He is interested in policy promoting educational equity as well as increasing diversity and inclusion practices in STEM, sustainability, and energy efficiency fields.

Where you can find Terrence Mosley during IBS: Demystifying Zero: Builders Share their Secrets for Cost-Effective Zero Net Energy Homes