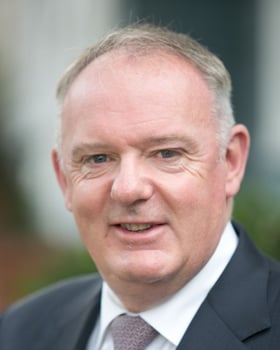 Gerard “Gerry” McCaughey is an internationally respected business leader in integrated of site construction for the residential and commercial construction markets. Named “Industry Entrepreneur of the Year” by Ernst and Young, McCaughey was an influential force in Europe’s continuing transition to off-site construction of wood frame homes with MMC. In the early 1990s, wood frame homes represented less than one percent of homes built on that continent. Today, FIOSS is used to build more than 30 percent of new homes in the U.K. and Ireland and nearly 70 percent in Scotland. McCaughey was the Co-Founder and Chief Executive of Century Homes in Ireland, and later named Chief Executive of Kingspan Century following the $100 million acquisition of Century by the European building materials giant Kingspan Group Plc. By focusing on fully automating the construction process with integrated technologies, McCaughey propelled Century from a small start-up operation of four employees into Europe’s largest offsite cinstruction provider, with market share in excess of 40 percent in Ireland and a dominant position in the U.K, pioneering the use of advanced software and hi tech automation. As founder of Entekra, McCaughey brought together an unrivaled team of international executives with proven track records in Modern Methods of Construction (MMC) & innovation, based both in California and Europe, to bring modern methods of construction (MMC) to the US construction market. McCaughey is an international keynote speaker on technology led offsite construction and was a recent winner of NAHB Building Systems Council Manufacturer of the Year and also led Entekra to win the prestigious Ivory Award for innovation related to housing affordability.

Where you can find Gerard McCaughey during IBS: