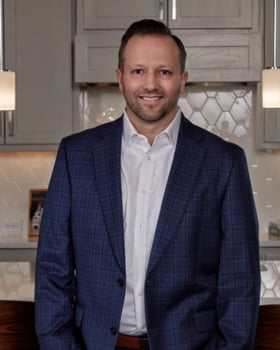 Chris Hartley has nearly two decades of New Home Sales Experience in various roles across the industry. In addition to his current role as Vice President of Sales for K. Hovnanian Homes in DFW, Chris is a Certified Trainer for the Texas Real Estate Commission, frequent contributor to industry leading publications, a guest on numerous industry podcasts, and a highly sought out Public Speaker. Chris has worked with both public and private homebuilders across the US. Chris has won numerous awards on a local, regional, and national level including the inaugural Gold Award at The Nationals for One to Watch through the National Association of Homebuilders. Chris is an active member of the Zillow Builder Advisor Board as well as a Board Member for AtlasRTX. Chris is an advocate for the American Cancer Society, being named a three-time Corporate Hero and is part of Team Determination participating in half and full marathons having raised over $200,000 fighting for the cause. Chris’s latest adventure is to compete in a full Ironman in November of 2021 as well as complete his children’s book series that is already receiving national attention.

Where you can find Christopher Hartley during IBS:

Managing Through Success Complacency: Keeping Your Team on Top of Their Game
Tuesday, February 8 | 3:45 - 4:45 PM EST